OHHHHHH, now I know I haven't posted here lately but this is an especially cool thing to come back with. I have with me today MEGAN HART, who is a fabulous writer. She's written in damn near every genre and they're all good. If you haven't already read her a) why the heck not?!?!?! and b) here's your chance to win her new book...FREE and WONDERFUL, what more could you ask for? How about a little blog post about her and her book? Coming right up!

Let's begin with a blurb and then get into the extra good stuff:

In the midst of a chaotic midnight assembly, Sunshine is forced outside into the darkness. Holding a scrap of paper scrawled with a stranger's name and address, Sunny grasps the hands of her three small children and begins her escape.
Liesel Albright has dreamed of starting a family. She never bargained on inheriting one already in progress…or one so deeply damaged. When nineteen-year-old Sunshine appears on the Albrights' doorstep claiming Liesel's husband, Chris, is her father, all they can think to offer is temporary shelter. The next day, they're stunned by the news that the Family of Superior Bliss, led by a charismatic zealot, has committed mass suicide. Sunny and her children haven't just left the compound—they've been left behind.
Now, instead of a baby of her own, Liesel must play mother to the four survivors, while Chris retreats into guilt and denial. For Sunny, however, a lifetime of teachings is not easily unlearned. No matter how hard she tries to forget, an ominous catechism echoes in her mind, urging her to finish what the Family started.
Now that's some good stuff. Onto the questions...
1. What led you to write a book about a cult? I find them fascinating though scary.
I've always been fascinated by cults, though yes, they are scary. I mean, what makes people join a group that so obviously doesn't fit in with what we "normal" people think of as right? Cult leaders, by tradition, are charismatic and compelling, but who are the people who fall in line with them? I wanted to explore characters who didn't necessarily join a cult, but who were raised in one, so had no choice about it.
2. What part of Sunny was the most difficult to write? The easiest?
The most difficult was writing about the abuse she suffered. I didn't want it to be too graphic, but researching what happens in cults, especially to children, was really hard. The easiest, surprisingly, was writing Sunshine's struggle with dealing with how she was raised versus the life she has after moving in with her biological dad.
3. What significance does the title have?
All Fall Down is, of course, part of a nursery rhyme. I didn't have a good title for this book, and my editor actually came up with it. Once she suggested it, it absolutely fit the entire concept of everything falling down.

Now the fun part!
4. Boxers or briefs?
Boxer briefs
5. What is your favorite ice cream flavor?
Mint Chocolate Chip
6. Give me a memory that still makes you giggle.
Oh. Gosh. Hmm. Well, how about the time we went to see Jason Manns play live in Philly, and you shouted out in the parking lot that we were "doing" Jason Manns? That makes me laugh.
7. Best Halloween costume you ever wore? I know what one I'd pick but I'd like to know what you think.
When I was in kindergarten, I was Darth Vader. I think that might be my all-time favorite.
8. What song do you like to rock out in the shower to?
Let it Snow. I don't know why. Also, Think of Me, from Phantom of the Opera.

A bio would be nice here! :)
Megan says: I was born and lived awhile and then I did some stuff. Now I mostly do things and whatnot. And I also write books. Learn more about me at: www.meganhart.com, www.readinbed.net, www.twitter.com/Megan_Hart and www.facebook.com/Megan.Hart

Also, I'll give away a copy of All Fall Down to a commenter!
BRING ON THE COMMENTS!!!! I'll choose a winner after Wednesday and then we firgure out the getting it to you thing.
Misty :)
Posted by Misty at 6:24 PM 10 comments: 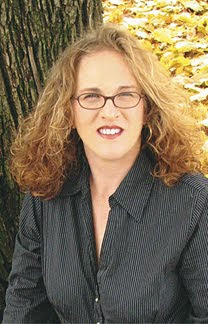